Over the past fourteen splendid months here at SQ we’ve brought you only the best, filtered iOS games for your iPhone, from the addiction that was Pixel People all the way to my current action-RPG fave Wayward Souls.  This evening however I present to you a different game – Bill Killem – which is not only a phenomenally addictive, and just downright fun retro platformer that’s part Contra and part Majora’s Mask, but something else.  It’s freakin’ free!

Bill Killem for your iPhone is Free, and it’s Awesome

Released just recently on May 22nd, Bill Killem is one of those rare, free iOS games that come around every now and then on the app store that you just can’t believe you didn’t have to pay for.  We all know how much garbage there is free game-wise on the app store, and while Bill Killem does serve up in-game purchase “opportunities”, they actually aren’t all that intrusive.  You know what will make you not even notice them?  The awesome gameplay.  Or the price tag.  The retro music is pretty awesome as well.  Or how about the subtle Duke Nukemesque humor throughout?  You catch my drift?  Good.

Hip, retro graphics aside (do they really need any commentary?), the game play in Bill Killem really sets the tone in this extremely fast-paced, smooth game.  You’re probably wondering where the heck I’m getting the Majora’s Mask reference from – I am guessing everyone and their mother’s at least knows what Contra is, and can see the obvious (and awesome) reference.  Let me explain.  As you will quickly find out once you get behind the sarcastic wheel of Bill Killem, you are essentially playing Contra with a Majora’s Mask time limit – the only way to extend the game is to grab clocks, which isn’t the easiest thing to do when you’re guns a-blazing amidst complete chaos.  But that’s what makes it fun – the challenge, the extremely fast-paced game play, and just the high quality feel that can be found just about everywhere in this I-can’t-believe-this-game-is-free … game.

But What About Star Fox?

You see, the hairy fingers that are behind this Pulitzer-esque iOS game review just recently turned the ripe age of 31, so that means I grew up with NES and SNES controllers in my hands as a kid.  If “retro gaming” to you equates to the GameCube, you and I are on different wavelengths.  That being said, Star Fox humor may not necessarily translate to you, which is what I was getting at above with the Duke Nukem references, which is also from that sameish gaming era (otherwise known as the Paleostellar Era).  For the true test of your gaming humor, please see Exhibit A: 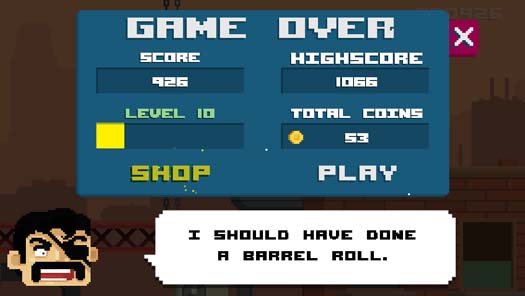 If you got it, and/or laughed at the above, then you’ll enjoy Bill Killem even more so than our slightly qualified young adults out there in SQ Nation (who are equally awesome, btw!).  If you didn’t get the joke, no worries – this game is that good that in all honesty it really doesn’t even matter.  (But on a side note, go play Contra and Star Fox.  Now.)

It’s hard to beat free iOS games for your iPhone, and it’s a no brainer when it’s free AND just plain spectacular.  Bill Killem receives our highest endorsement here at SQ (even though I hated the Kill Bill movies – sorry Quentin!); if I see you on my next business trip, this game had best be on your iPhone!

More great iPhone game reviews to follow – for all of our iOS reviews just hit up our official tag – iOS Games We Like, and thanks for stopping by SQ!