For the past year here at SQ we have highlighted some of our favorite, and the mobile gaming industry’s favorite iOS games, from Ridiculous Fishing (2013 GOTY award winner) to Mutant Mudds.  One game that we have not mentioned however, is a dangerously addictive title called Pixel People.  Released almost a year ago on January 31st, 2013, Pixel People is a very cool cross between Sim City and The Sims, and has garnered an immense following on the App Store with some excellent reviews.  Is it a great game?  Yes, phenomenal even – but I had to recently banish it from my iPhone for one huge reason with the game’s design.  It was a sad day, but a necessary one.  Hit the linkage below for the full break-up letter.

Did I mention this is a free game on the App Store?  No?  Well, there you go –  free, pixelated crack-cocaine for ya.  All joking aside, Pixel People is a pretty awesome game.  From the moment you step into Utopia as newly appointed Mayor, you will become entranced by the mission of discovering new clones: with more than 300 combinations for different clones, the discovery process will not only excite you, but it will consume you as well.  The Sim-City aspect comes into play nicely as well as you are forced to manage your city’s economy as well, since your clones need houses, places to work, and much like everyone’s favorite activity from The Sims, they need to fall in love as well.  This game literally kept me hooked for five months, as I kept building and searching for ways to discover more and more of those elusive clones, which was maddeningly fun until it simply became maddening.

Why I Stepped Down as Mayor of Utopia

Although I have no hard feelings – Pixel People is easily one of the best iOS games available, free or paid – Pixel People could have been built a lot better when it came to actually discovering new clones.  While clone discovery is quick and fast to start the game, the further one gets into the game, the harder it is to keep finding them.  Let me get things straight here: I love challenging games.  If you don’t believe me, ask my SQ co-founder, Tebo, who has seen me beat the Control level on Goldeneye 64’s 00 Agent difficultly level more times than well, most people have probably beaten it on Agent level.  What my issue with Pixel People was is the entire “mission” setup, and finding animals.  While I get this game is targeted for gamers of all ages, the missions – which towards the end is the only way to discover new genes to splice – were absolutely stupid.  I know I’m not the only one who thinks that, and while I loved the game, that’s the primary reason why I walked away from Pixel People. 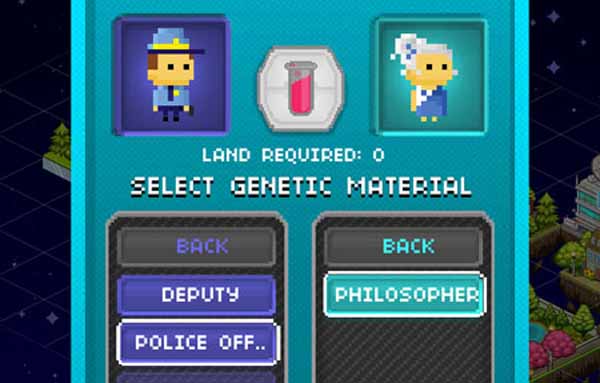 If you haven’t given Pixel People a whirl yet, don’t be turned away simply by the cartoony graphics; the game play is awesome, and this title will keep you busy for months (literally).  Although Pixel People has it’s shortcomings, I had a great time building my city, and to be honest, any time a game grabs my attention that much – so that I am actually going for the 100% completion rate – is well deserving of a referral.  So while I may have broken up with the city of Utopia, the game was just one architectural-modification away from being awesome.

What were your thoughts on Pixel People?  Did you share my grief with the game’s missions as well?  Drop your comments below!