If you still haven’t heeded our advice in regards to Ridiculous Fishing, which was just recently awarded Apple’s prestigious 2013 Game of the Year award, what in the world are you waiting for?  Allow me to emphasize the fact that more than seven months since we first posted about the ridiculous awesomeness that is Ridiculous Fishing, we are still playing and enjoying this game.  Hit the link below for more on the award, as well as for details on which title brought home the iPad Game of the Year hardware.

Although RF is not a free game on the App Store, it’s only a measly $3.00, and well worth the purchase price folks.  With dynamite game play (literally, at times), slick retro-esque graphic visuals, and crazy amounts of depth (both in water and in game play longevity), Ridiculous Fishing is well-deserving for this award.  Once again, if this game is new to you, then head on over to our original coverage on Ridiculous Fishing to learn more, or hit up the App Store on your iPhone and start playing this great game today.

Alright, well what about the iPad Game of the Year trophy?  Which game took home top honors for 2013? 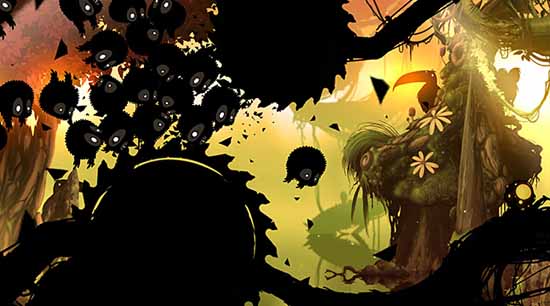 If you’ve still got $4 bucks left over after throwing down for Ridiculous Fishing, then I’ve got your next must-have title for you: Badland, which comes in as Apple’s 2013 Game of the Year award winner.  This game is dark, has addictive and cooperative gameplay, and in my opinion was a front runner for either/both of these awards.  While I have not played this for the iPad, I do still play this game frequently on my iPhone 5: the graphics are awesome (reminds me of Limbo if you’ve ever played that stellar game), and you have to play Badland to really experience just how cool it really handles.

Stay tuned to SQ for more great coverage on the best iOS games!