The NBA Playoffs are in full swing, and I’m a happy camper because my Chicago Bulls are up 1-0 on the defending champion Miami Heat, and that’s without MVP Derrick Rose, Luol Deng, and Kirk Hinrich.  Although I am excited to catch Game 2 of the Bulls/Heat series tonight on TNT, the second game in the Spurs/Warriors series this evening will surely not disappoint.  You know what also never disappoints?  Photobombs.  I remember back in the early days of the Interweb, before you could “tag” faces of your friends on Facebook, Maxim magazine ran a “photobomb” or “that guy” photo contest where readers actually had to mail in photographs (snail mail, folks) of their best photobomb pics, whether they were planned or not.  How’s that for nostalgia?  Anywho, Tim Duncan just happens to land as an electronic photobomb in this awesome pic below; you’ll have to click on the link to check it out, because we’re dicks like that. 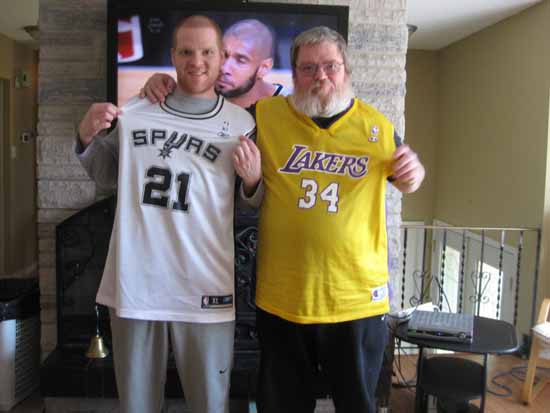 It appears to be a father/son duo, and I think you have a better chance winning your state’s PowerBall Lottery before even attempting to get a planned photo of this; can you imagine the timing of this during live television?  Of course you could just pause it with a DVR, or even Photochop it, but still.  What an awesome picture.  Let the “Santa Claus/Laker fan” comments begin below!  More great photobombs to follow!