So who remembers the mullet kid from Nintendo Power?  Okay, hold on; maybe I should take a step back here.  Who remembers Nintendo Power?  Anyone?  Bueller?  If you’re too young to remember the awesomeness that was Nintendo’s “Nintendo Power” magazine, then I’m sorry because you honestly missed out.  This was long before the days where you had awesome websites like SQ around; we kids had to wait four weeks in between issues, and let me tell you, when you’re trying to beat Battletoads, those maps that magazine had were priceless.  I remember my original Nintendo Power subscription came with a free game; I got to choose one of three games, and though I can’t remember the other two, I ended up picking Dragon Warrior.  Awesome game aside, do you want to know what else I remember from that first subscription to Nintendo Power?  That mullet kid who had the coolest room in the world.  And a turtleneck t-shirt.  Hit the link below for pure nostalgia, and/or laughter regardless of what age you are. 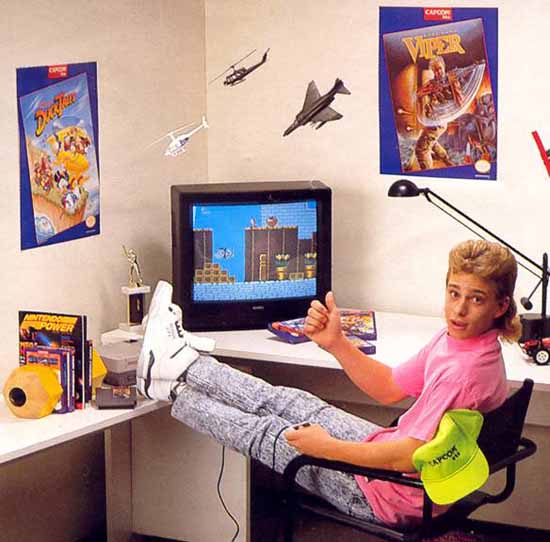 Soak that pink turtleneck t-shirt in.  And who wants to wager that little league baseball trophy is fake?  Oh, how I miss the 80’s.  Leave your caption contest comments below, and drop us some of your best Nintendo Power memories as well!

And since I teased ya’ll with the N64 kid: http://www.youtube.com/watch?v=pFlcqWQVVuU