Unless you’ve been living under a rock for the past week or so, you likely have seen the depressing news that Los Angeles Clippers owner Donald Sterling appears to be a closet racist – even though his team’s coach, and the majority of his players (not to mention the majority of the entire league’s players) are African American.  Originally reported by TMZ (source), Donald’s alleged remarks were recorded in a conversation with his girlfriend, V. Stiviano (who yes, just happens to be African American and Mexican), stating – and I am summarizing – to not bring “black people to his games,to include Magic Johnson”, to not take Instagram photos with black people, and much, much more.  While I am a firm believer in our judicial system here in the US – innocent until proven guilty – it’s hard to argue against this one with everything that has become available.  Nevertheless, as the SQ faithful know, we like to continually lighten the mood with any situation, and we found two Golden State Warrior fans who will definitely do just that with their hilarious signs from this weekend’s playoff game.  Hit the link below for the full funny pic!

Fans of any sport are always a creative bunch, and while college basketball is probably known best for creative signs, I have to give credit to these guys for coming up with a stellar idea to heckle the Clippers’ owner: 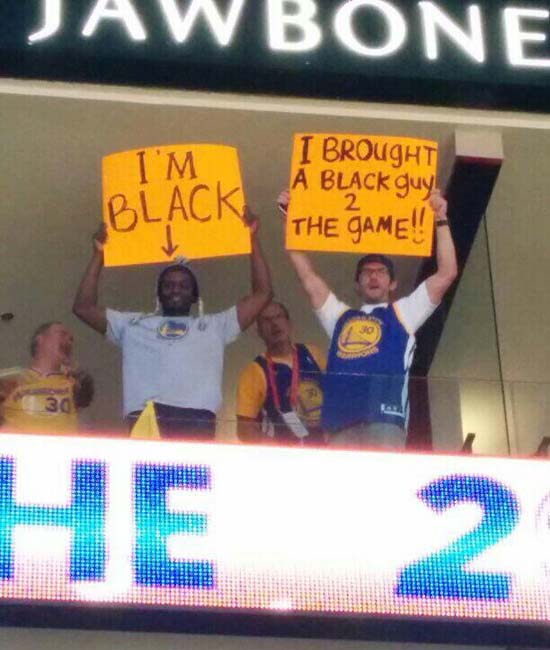 No that is not photochopped, and yes they went live with these over the weekend.  Whether or not Mr. Sterling saw them or not is irrelevant: the fact that fans of every color are united against racism and his alleged idiotic beliefs is what’s truly relevant, and will come through in the end.

To these two Golden State Fans, this Chicago Bulls fan salutes you!  For all of our funny pics here at SQ just head on over to our official funny pics site tag – we’re always adding more!