Get excited!  In just two short hours, night-shifting, high school employees at your local GameStop’s and Best Buy’s will be stocking store shelves with the latest version of everyone’s favorite simulator, SimCity.  While the only folks likely to be camping out this evening probably hold Urban Planning undergraduate degrees (yeah, and you thought Political Science was awesome), let’s at least pay some homage to where homage is due as we travel back in time and savor those one, or maybe two hours, where we actually enjoyed playing SimCity.  Alright, maybe a half an hour.

Build, Destroy, then Back to (Insert Cooler Game Here). 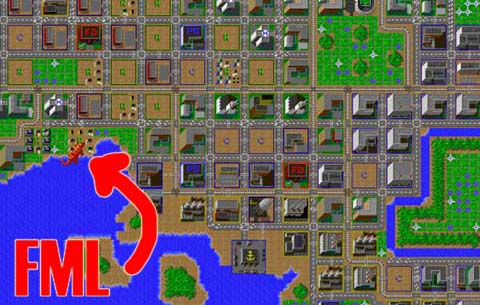 Remember playing Flight Simulator at your buddy’s house next door?  Remember how long the fun lasted on that one?  I think every kid in the world who sat behind the throttle of their first simulated flight got so pissed because they couldn’t figure out how to take off, only to take out their frustration once they finally do get up in the air by kamikazying (English major I am not) into the then-Sears Tower in downtown Chicago.  After that fun ended we did what every other kid did in America: go back to playing Contra.  SimCity was no different: the thrill of building your own city faded almost immediately once you started seeing those dreaded lightning bolts because your stupid citizens kept blowing their fuse boxes because they hooked up too many George Forman’s.  Oh, and then there’s that whole “public administration/governance thing” that we’re all whizzes on at the educated age of 8; did Maxis all assume we had MPA’s back then or what?  Regardless, the fun ended soon thereafter once we discovered the destruction button, where one Kool-Aid-infested kid could wreak havoc on his/her recent creation with the push of a button via tornadoes, earthquakes, Godzilla, and more.  Five minutes later the SimCity CD-ROM was back in its jewel case faster than you could open up a packet of Pop Rocks, and once again, we normal kids went back to playing Contra.

Maybe that’s why I joined the Marine Corps after college instead of running for mayor?

Got a funny SimCity story from the past that you’d like to share, or want to stand up for the urban planners?  Leave your comments below and show us how qualified you are!