If you’ve never played a role playing game before, then you will likely not get the humor in this post.  RPG’s over the years have enabled gamers to create their own characters, and then jump into a massive gaming experience that can span more than 100 hours of complex game play.  Although each RPG allows gamers to select their character from a set selection of “classes”, some classes are more rare than others.  The “Bard” in particular, is probably the rarest of them all, and in my opinion, for good reason.  If you’ve never heard of bards before, much like my advice in the beginning of this post, it would probably behoove you to move on to some of our other, slightly qualified content, because this may be lost on you.  Let me get to the point: why oh why would a gamer create a bard, whose primary weapon is a musical instrument, over say a warrior or a mage, who carry a sword or lethal doses of magic, respectively?  Oh, what’s that you say?  The bard is crucial to the team because he can boost morale?  Excuse me while I step outside and attempt to recover my professionalism.  If there has ever been a laughingstock class in RPG’s, it’s the bard.  Sorry to all those who have posters of bards on their walls, but seriously, there can’t be many of you.  So what’s this “proof” that I speak of, you ask?  After all, it is the title of this post.  Hit the link below, and prepare yourself for at least 10 minutes of genuine hilarity and satisfaction!

Proof That You Should Never Be a Bard 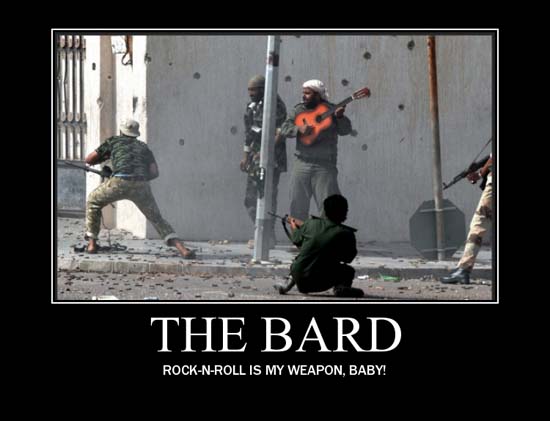 Oh the funny comment possibilities on this sadly authentic image.  As a Marine, I naturally get a kick out of that whole fire team’s outstanding shooting positions.  On top of that, do you see that dude in the center of the photo who looks like he’s trying to hide behind the street pole like a cartoon character?  I would say this is that dude’s first, and probably last, firefight.  The point man also probably played some Call of Duty Black Ops right before this mission, as that can only explain the backwards baseball cap.  I bet that bard is motivating the shit out of his team; at least he was smart and wore body armor!

Let the comments begin!  If that’s not proof that you should never be a bard, then I don’t know what is.  More great funny pics to follow!