Out of the four of you that read this site, who remembers the old school cell phone and TI-83 calculator game, “Snake”?  Remember that pixelated game of addiction, or am I alone on this?  Well since my high school math days in Algebra I, video games, and calculators have come along way.  Now kids are playing on iPhone 5’s and Samsung  Galaxies in junior high math class, when I didn’t even have my first cell phone until I was a sophomore in college, but I digress.  Fast forward to just a few weeks ago, when I dropped a measly $.99 cents on an intriguing little iOS/Android game called, “Nimble Quest”.  If you couldn’t guess by the post title, we like this one – a lot.  Hit the link below for more on this awesome electronic addiction.

Nimble Quest: Diablo 3, This Is Not

The first thing that sucked me in, like is the case with most gamers, was the visuals.  My first impression as I flipped through the Nimble Quest iOS screenshots screamed that this was an awesome NES-style RPG for my iPhone 5.  Without even bothering to check out the description, which is hilarious by the way, I threw down 99 copper pennies and began the quick install.  Once she was live, retro NES-style MIDI music started pouring into my ears, and I really got amped.  I selected my party leader, and fired up my first play through only to quickly realize that this is not what I expected; Nimble Quest at its core is a game of Snake.  You are constantly moving, and to quote that Apple App store description, “Swipe to steer your unstoppable (seriously, you can’t stop) party as they cut a path of destruction through levels filled with different enemies and power-ups.”  What you’ll also find to be unstoppable is your play time, because this thing is addicting.

Nimble Quest has many advanced RPG elements, such as leveling up your party members, and selecting skill set enhancements, but it is not an RPG.  Nimble Quest is an addictive, quick-hitting, action game that is so much fun to play, and all those RPG elements, and NES-era graphics just make it that much more enjoyable.

As I mentioned above, Nimble Quest is “Snake with armor”; not that kind of armor, but you know what I mean.  You aren’t forced to learn complex storylines or game play techniques, just to stay focused, kill as many bad guys as you can, and see how long your medieval wedding conga line can survive.  Nothing is forced on the player; after a few minutes of playing I found myself automatically pulling in new hilariously unique “heroes” into my party, and I didn’t have to watch a single cut scene to introduce the new character’s story line.  Not that I don’t enjoy a great story (devout Bioware fan here), but mobile gaming for me is when I’m sitting on an airplane, or in the back seat of my buddy’s car on a long road trip.  I want action, and appreciate the simplicity; Nimble Quest takes it a nice step forward by adding those extra elements, but doing it so tactfully that you’ll really appreciate it.  Nimble Quest is just a great user experience.

As a huge retro gamer, Nimble Quest was a huge draw to me visually because it has that 8-bit look.  When you jump into the game for the first time, your ears will be introduced to that old school music that I haven’t heard since I was a kid playing Dragon Warrior on my living room floor.  What’s cool though is that the quick, addictive game play gives it that retro feel; you don’t need to learn complex moves, or organize spells, or anything crazy like that – all you do is move, and it’s a blast.  NimbleBit, the creators behind Nimble Quest, did a stellar job at incorporating next-generation animations and graphical effects, but still somehow maintaining that NES feel.  That combination really makes for a rich gaming experience, and to have it all on your iPhone or Galaxy S4 as your ride the bus to Initech each morning is pretty awesome.  What’s not awesome is if you didn’t understand my Initech reference.  Google is your friend.  TPS reports are not. 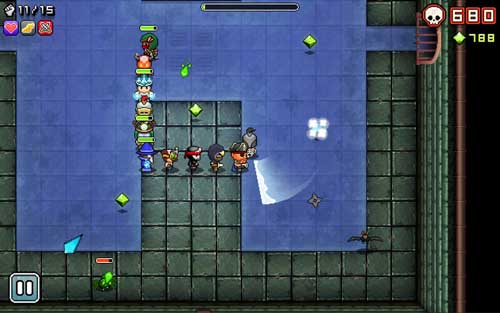 3. It’s extremely hard, yet I keep coming back.

Our most recent iOS review for Ridiculous Fishing had a similar style: it was extremely tough, but it kept me as a gamer constantly coming back for more – “alright, just one more time”.  Just when Nimble Quest begins to get seriously tough, your party members will start reaching new levels, which bring new abilities, and a stronger party.  Courtesy of your new-found strength in numbers, which was D.A.R.E. Rule #5 (or was it 4?), you roll deep into the first Castle stage only to get absolutely steamrolled within the first 30 seconds.  This is when addiction sets in, which D.A.R.E. is all about preventing; so much for that program!

If you’re looking for a new mobile gaming addiction that you will actually have fun playing, and not just for one play through, then look no further than Nimble Quest.

If you’ve played Nimble Quest, or have any other slightly qualified iOS/Android gaming recommendations, drop us a line in the comments and fill us in!