Are Snowden’s revelatory documents on US government’s secret organizations criminal or heroic?

How much privacy are Americans willing to forego for increased security?

Why is the Xbox One bold and the PS4 italic?

Amidst the chaos that churned Reddit and most of mainstream America this past week, the Xbox One and the PS4 have not-so-quietly chosen their sides regarding their video gamer populations. Microsoft opted for the in-your-face, deal-with-it style of taking over your living room while Sony built a console that just wants to game (it can do other stuff too, but it’s main function is for gaming). 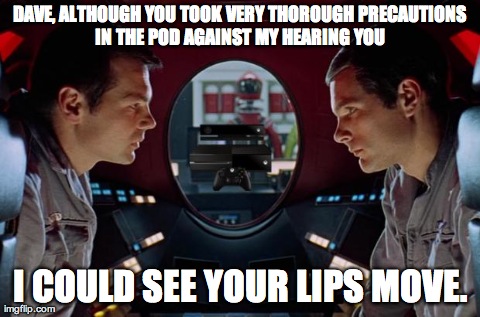 According to a Gamespot interview, the Xbox One will only work when connected to the Kinect. Meaning the days of simply turning on a console and gaming by just ourselves are over. Now, in that same interview, we learn that the owners of the console are supposed to be able to limit the amount of data the Kinect will intake all the way to nil, but that sounds like a buying a new car and intentionally disabling it’s finer features.

Furthermore, the Kinect is calibrated to pick up your heart rate, facial expressions, and how you berate your lazy cat when it strolls in front of the TV in the middle of a killing spree. That’s a lot of cussing in my house.

PS4 to Keep GameStop in Business

Sony took their next-gen console in a whole other direction: gaming. We can play used games – so Gamefly will be happy too. And while the PS4 will have their Eye, it is an additional $60. So it has that working for it. And optional sounds a whole lot like the word minimum to a college English major.

Unfortunately, the PS4 will not be backward compatible, but we’ll get over that. We’re hoping Sony’s business plan is not based off of people spending $400 to play the games they already have. Plus the PS3 will still function just fine for that reason.

What We’re Hoping For

Microsoft: Ease of the gas with the Kinect.