Call me Master of the Obvious here, but the criminal rung of society for the most part isn’t comprised of the smartest individuals.  As a Houston resident now for almost two years, I have seen some insane stories and videos courtesy of the local news channels, but this fight video which shows a former MMA champion-turned gas station attendant absolutely annihilating a pair of “maybe-we-should-have-made-sure-the-gas-station-clerk-wasn’t-an-MMA-fighter-before-robbing-his-buddy” robbers just might take the cake.  You’re going to want to watch this video – trust me!

So was that not awesome or what?  I guarantee that is the last time anyone tries to rob that Fuel Depot on the south side of Houston – or at the very least I would think future robbers would try and make sure Mayura Dissanyake is on his day off before they try and steal some Doritos.  Speaking of Doritos, with this epic fight video having already gone viral this lovely Monday morning, there have been a ton of hilarious comments flaoting around the Interweb, but none better than a Mr. Brent Rose over at Jalopnik.  While I didn’t even pick up on this side joke, the video screenshot says it all: 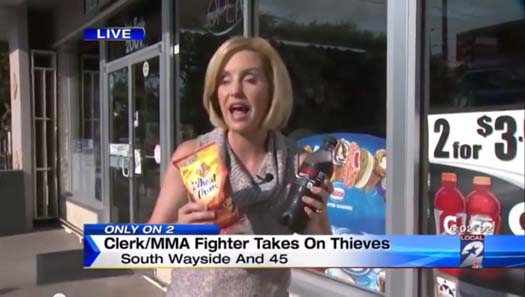 If you’re craving more high quality entertainment before you begrudgingly head into work this morning, we’ve got you covered with tons more fight videos, funny videos and countless other content tags a few inches to the right in our SQ tag cloud.  Happy Monday!