If you haven’t heard of “Mars One“, then let me bring you up to speed.  Eight short years from now, the first human – and private – mission to mars will commence, and those pioneers will not be coming back to Earth.  The Mars One mission is that of colonization: to “establish a human settlement on Mars.” (Source) Yeah, pretty incredible stuff, right?  Most folks’ first response when hearing about this plan – if they didn’t dismiss it entirely to begin with – is that no private company (let alone the US government) would be able to finance a perpetual colonization mission on Mars, and they pose a very valid point.  However, the billionaire founder of Mars One has proposed an absolutely ingenious solution to the money problem: first of course, he will get the mission started with his own checkbook, but what will blow you away is the second half of his plan – Mars One will be a 24/7 reality freaking television show.  No, I am not kidding.  Everyone on the planet will now be able to watch – and watch they will – the first humans travel to, land and colonize the red planet, and television networks will pay just about every dollar they can find in their couches to get airing rights.  You’re excited now, aren’t you?  So what does this have to do with Andy Weir’s latest sci-fi suspense/thriller, The Martian?  Everything.

The Martian Initial Thoughts: Get a Mars One Preview Now

While I am only about halfway through The Martian, let me just flat out say that it is awesome.  Andy Weir’s latest thriller will not only offer a few atmosphere’s worth of suspense, but it will make you laugh over and over again through the hilarious character that is astronaut Mark Watney.  I only had about an hour flight today, but I ended up cranking out nearly 100 of Andy Weir’s pages – this is a definite page-turner, and one that deserves a place on everyone’s book shelf, whether you like sci-fi or not.  But enough about the review – this book is a winner – what about this alleged Mars One connection?

While I don’t want to spoil anything for those of you out there who are interested in reading this novel (that should be every single one of you), let me put this more frankly: slight spoilers ahead.  Last chance to back out … okay here we go.

So as you can easily read from the inside flap of The Martian, astronaut Mark Watney and his never ending supply of sarcasm are stranded on Mars after his team’s mission goes south.  Earth presumes he didn’t survive, (spoiler – okay now this is the last chance!) until – shocker – they find out he’s still alive.  This is where that reality television show connection comes into play with The Martian: as you read this awesome book, it will make you think immediately about the upcoming Mars One mission and its planned reality television show.  Just like on Earth in the book, every single human being on the planet is going to be GLUED to their television sets and Internet feeds if/when Mars One actually hits “launch” in real life.  If you can’t wait another eight years for what will likely be the most popular television show of all-time, then The Martian is a knock-out, four star, page-turning preview. 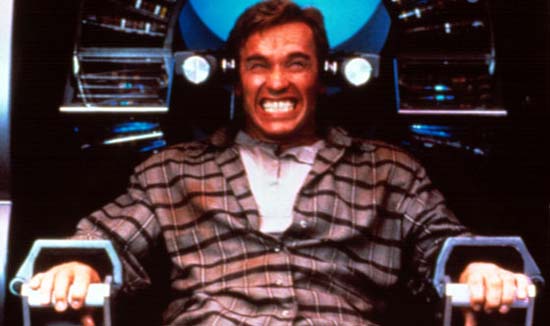 (If you don’t know what movie the above image is from, your parents failed you as a child.)

Get this book now – you won’t regret it.  More book reviews as we pump them out – for all our “good reads” content here at SQ, look no further than our “Read” tab up at the top in our main menu.  We’re always adding more, and of course we’d love to hear what you’re reading in the comments below!  It only takes a minute to register – that way we can prevent spam – and benefits of free SQ commenting membership are too good to pass up, like camaraderie and lots of notional high-fives for being extra sarcastic.  Seriously, read this book, and let us know what you think below!

2 Replies to “The Martian Initial Thoughts: Hilarious, and a Mars-One Preview?”