Ladies and gentlemen, I’d like to formally introduce to you a young United States Marine, PFC Merica.  No, that is not a spelling error or typo; PFC Merica, as in ‘Merica, or America.  How awesome is that last name?  While I was in the Marine Corps from 2008-2012 I came across many a stellar last name when it came to the Marine Corps’ ranking system: LCpl Boot (seriously), Capt Commander (not joking), and many, many more.  Obviously the best route for PFC Merica to go would be the MECEP (Marine Corps Enlisted Commissioning Education Program) route to become an officer, because how could you honestly pass up being called Captain Merica for 4-8 years?  Granted those would be big shoes to fill, but I can tell by this guy’s smile that he’s got in him; at the very least I hope he becomes the SgtMaj of the Marine Corps, because SgtMaj Merica sounds equally awesome as well. Full photo and more after the jump!

While boot camp and OCS drill instructors love any humorous way to lock on and mentally destroy one of their recruits, you just know that they couldn’t have ignored Recruit Merica while he was in boot camp.  You also know – well at least my SQ Marines, Soldiers, Airmen and Sailors (and Coasties) – that whoever was before and after Merica in the alphabet was thanking their favorite deities that this guy was in their platoon, because it most likely spared them countless hours of “extra attention”. 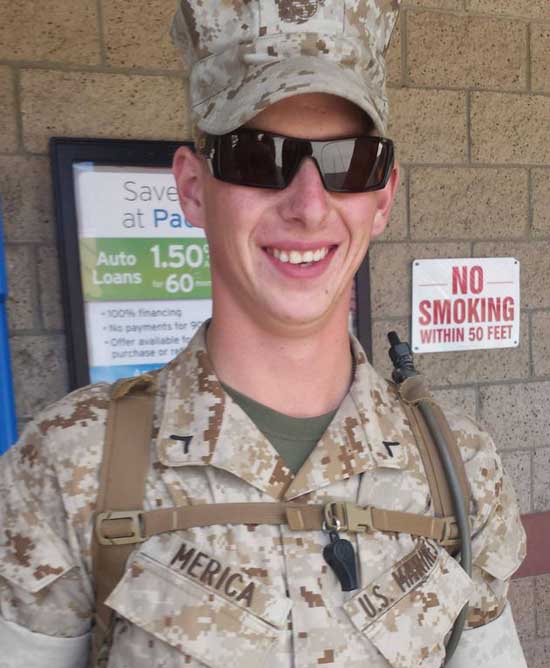 To PFC Merica, if you ever read this, we salute you, and wish you nothing but the best Marine Corps career.  Semper Fidelis Marine!

//Photo credit unknown; drop us a line below and we’ll give credit to whoever took this great photo.

One Reply to “PFC Merica: You Know His Drill Instructors Loved Him”