I miss a lot of things from my time in the Marine Corps, but eating MRE’s (that’s Meals Ready to Eat for my civilian SQ’ers) sadly is not one of them.  While I’m not a picky eater by any means – I would eat just about every MRE out there – there were a few that actually weren’t too bad, either hot or cold.  The best MRE item by far in my four years of fine field dining was the dairy milkshake: I don’t care if it had 20 grams of trans fat, or blocked you up for the next 90 days – those things were freaking incredible, and it was a blow to my heart when the DoD said to throw them away during a salmonella scare.  Guess what – this guy still ate ’em, and it felt great.  But enough about MRE dairy milkshakes, there’s a new menu item in town that’s half safety and half motivation; can it overtake the milkshake?  We’ll see.  Hit the link below to crack open the latest MRE from the four star chefs at the Pentagon.

Yes, you read that correctly: the new MRE menu item is an olive drab Can of Man energy drink, whose 12 ounces of motivation are best enjoyed while wearing a PT belt.  Is this a joke?  Yes, but at least it’s an awesome one! 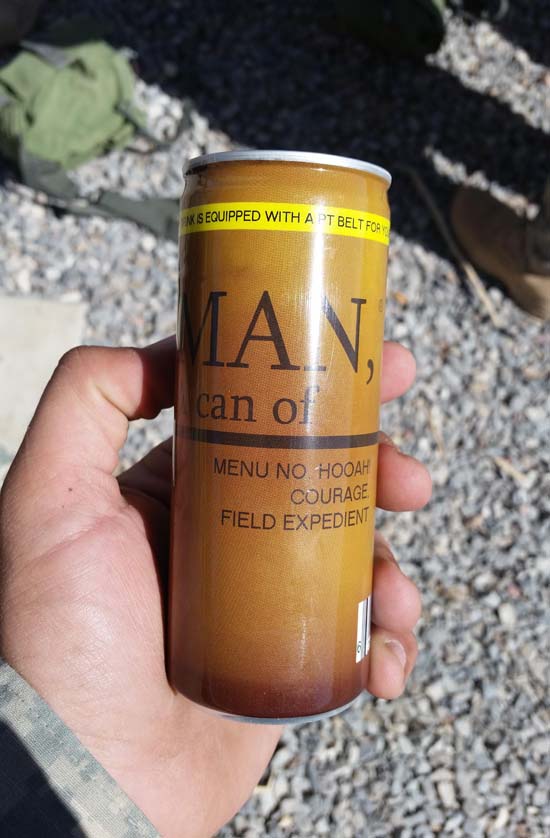 While I know my soldiers out there in SQ Nation have had to endure a lot more PT belt (sorry civilian readers; it’s essentially just a reflective belt/strap) misery than we did in the Corps, unit rules regarding when you have to wear them could still borderline on ludicrous.  What’s that?  You want me to wear my PT belt with 300 other dudes while we run on a closed off base street, book-ended by a pair of humvees at 9:00am without a cloud in the sky?  Yes, that actually happened, and frequently.  Often times in the military, common sense doesn’t seem to apply.

So the question I have to ask is what MRE menu was your favorite?  Chili mac?  I actually preferred First Strike meals (the combat deployment version of MREs) simply because of the fact that you get either a pack of chicken or a pack of tuna, so that would probably get my vote.  Drop us your favorite MRE/menu item below, but don’t you dare say Charms!  Seriously, don’t go there.

One Reply to “New MRE Menu Item Is Half Safety, Half Motivation”