If you’ve deployed to Afghanistan or Iraq over the last decade, then you’ve likely received or seen one of your buddies crack open a care package filled with dozens of cards from kids.  I have a mother, sister and multiple cousins that are school teachers, so you could say I got my fair share of cards from kids back home, and I would say one out of every ten or so was an absolutely hilarious one.  Kids – especially when they’re young – don’t know anything but honesty, so that can result in some award-winning deployment cards.  I thought I had seen some awesome ones until the one below (hit that link – you know you want to) pretty much trumped it.

“Have a good war.”  It doesn’t get any more blunt than that.  I would love to meet this kid just so I could give him/her a huge high-five, because that’s just about the best deployment card from a care package I’ve ever seen.  Now I’m going to have to dig up the ones I have and see if I can one-up this card; I’m almost positive I won’t be able to, but we shall see! 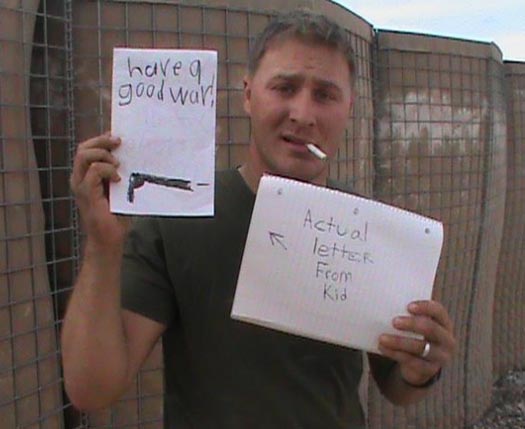 If you’re looking for even more great content at SQ, we’ve got you covered: check out all of our funny military pics, funny pictures, or just hit up our ginormous tag cloud on the right hand side of the site.  More hilarity to follow!