Newly commissioned officers in the Marine Corps – and I can only assume this guide will translate to my counterparts in the Army – get absolutely inundated with leadership advice, and for good reason: they are about to take responsibility not just for some company’s new project or marketing plan, but for a platoon of Marines.  So why do they fail?  Where is the disconnect?

I would argue that the consistent theme of failure is actually more precise than many believe – especially at the entry level leadership position that is Second Lieutenant.  In fact, I would argue – and I will below – that there are six primary causes for relief of command at the platoon leader level, some stronger than others, and quite frankly none all that revolutionary.

What this article is not  is another guide on leadership advice, as there are plenty of those – in the past two months alone I’ve come across three different platoon oriented leadership guides on Tom Ricks’ Best Defense Blog at ForeignPolicy.com here, here and here.  Rather, this is a guide for new lieutenants on what not to do – from a practical, bottom-line-up-front perspective, when they take that first coveted step into platoon command.  The goal, or end state if you will (hey, I’m in the IRR), is to provide awareness to those wide-eyed, leadership advice-seeking sponges with gold bars on their collars so that they can focus their time on not only what they’ve been trained to do, but their most important task: leading Marines or Soldiers.

How to Lose Your Job, If You’re a Lieutenant

Rather than do a full-blown op-order and sand table (I do know a great sand guy), I’ll just keep it notional for the most part and start this off with a little orientation for those of you who may be new to the SQ Neighborhood.  I served as a Marine ground intel officer from 2008-2012, and while I have not witnessed all of the causes below, I’m sure the rest of you have – that’s what the comments are for so we can keep this discussion rolling.  So without further adieu, standby to copy.

Lose Something with a Serial Number

We’ve all witnessed it: your TBS platoon is somewhere deep in the heart of the Quantico Highlands finishing up a field exercise, when the student platoon sergeant gets everybody into formation – excuse me, into a cluster – to quickly knock out a serialized inventory.  “Alright Devils (motivation is continuous at TBS – especially in the field), everyone hold up their NVG’s so I can count ‘em.” “One, two, three, four … Johnson, what the … ?”  “Congratulations 1st Platoon, you just won yourselves a shoulder-to-shoulder, character-building woodland vacation in Quantico until we find ‘em.”

My slightly qualified advice: if you haven’t done a 100% serialized inventory of every piece of equipment within your first 24 hours of platoon command, you’re wrong.  Chances are you’ll experience the classic “hard drive turnover” from the outgoing platoon commander – which will leave you with a really nice warm and fuzzy – so don’t take any chances on his/her inventory or record-keeping abilities.  Maybe there’s something missing – if you wait too long to discover or report it, it will likely fall on you – you had just better hope it doesn’t have a serial number, because that is arguably the most common way a lieutenant will lose his/her job.

ND your own Weapon

Does this really need any explanation?  For those of my civilian readers out there, ND stands for negligent discharge, or put even more simply – accidentally firing your own weapon (and hopefully not killing anyone in the process).  Think about it from the next level up: if you are a company commander, and you just witnessed one of your new platoon commanders ND their M4 or M9, would that inspire confidence in their leadership ability or just pure stupidity?  I’m not going to answer that one, as I shouldn’t have even explained this one as much as I have – if you’re incompetent enough with your own rifle, then you certainly aren’t qualified (not even slightly) to lead a platoon.  I wouldn’t even want you as my Adjutant.

First impressions are everything.  While some of these causes of platoon relief may not necessarily be career killers, receiving a DUI almost certainly is – especially at the second lieutenant level.  With the excellent nightlife in Washington D.C. just a short drive away for new second lieutenants at the Marine Corps’ Basic School in Quantico, the temptation to drive back to base rather than split a hotel room with your buddies in Georgetown is great, and likely takes a handful of newly commissioned officers down the path of career death each and every year.  While the cops on I-95 may not pull you over in your new Mustang (no, I did not drive a LT Mobile) at 0300, the Marine MP’s at the gate certainly will.

Have 1+ Range Safety Violations While Acting as RSO/OIC

As a scout sniper platoon commander, and then as a company executive officer I have led live-fire ranges that included everything from high angle cliff shooting (maybe the coolest day with my platoon during our AFG workup) all the way up to machine guns and high explosives.  As the platoon commander, it is your job to train your Marines and Soldiers in the toughest, most realistic setting you can create, but go ahead and get one of your men or women hurt – or God forbid, killed – and you’ll be relieved of command faster than the range control guy can spit his coffee out to radio “cease fire”.

While thankfully this is not a common experience or cause of platoon relief, having one or more range safety violations while you are either acting as Range Safety Officer or the Officer in Charge quite frankly is – and it should be.  What I mean by range safety violations for those of you reading this that are not in the military are things like someone firing their weapon after the range has gone “cold”, or having an individual move past the limit of advance on a fire and maneuver range.  While no one may necessarily be hurt, it is certainly a close call – and one that you can bet your butter bars on that will lead to an investigation.  And guess who will be front and center for that party?  Yup – you.

Have 1+ Heat Cases on your Watch

Much like the range safety violations above, registering one or more heat cases on your watch may not land you on the bench, but it will certainly put your early career on the wrong trend line.  It ultimately, and again much like live-fire range planning above, comes down to doing a proper operational risk management assessment, because maybe – juusssttt maybe – that CrossFit “Fight Gone Bad” workout in MOPP-4 gear you had planned for your platoon tomorrow morning isn’t such a good idea.

Get caught dating the CO’s daughter

Since this is SQ, and not the Marine Corps Gazette, what would an article like this be if we didn’t have just a little fun?  I blame this momentary lapse of professionalism on the fact that I watched Stripes last night for quite possibly the 3,000th time.  “Czechoslovakia?”  “Yeah!  It’s just like driving into Wisconsin.”  “I got my ass kicked in Wisconsin.” 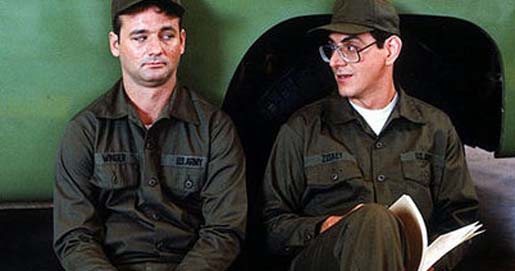 Like everything here at SQ, this guide is not all-encompassing – drop us a line in the comments below with what you think should be added, removed or remain as is.  And if you’re craving more outstanding (of course you liked this article!) military content, we’ve got you covered here at SQ with plenty of High Value Content Tags (HVCTs), like Marine Corps, Afghanistan Combat Videos, Funny Military Pics and much more.

As always, there’s much more to follow here at SQ so standby to standby!

3 Replies to “How to Lose Your Job, If You’re a Lieutenant”