Now how cool is this beast?  Having worked with a few different drones from my recent time in the Marine Corps, I can definitely vouch for the huge value they bring to the battlefield; on that same token however, many of them also have significant shortfalls.  Although drones are making the biggest impact from the skies at this point, robots on the ground have been a huge help in the fight against IED’s (CIED).  Boston Dynamics has been at the forefront of ground-based robotics for the US military, and that four-legged gentleman who you see above is their latest and greatest creation: his name is WildCat, and you do not want to be in front of him when he starts a chargin’.  Check out the video, then hit the link below for our thoughts on if this guy is battlefield ready yet.

Meet the WildCat from Boston Dynamics

According to the engineering team over at Boston Dynamics, WildCat is being built for every type of terrain, and currently tops out at 16mph on level ground through “bounding and galloping gaits.” (BD’s Website) While 16mph isn’t going to knock anyone off their feet on a spec sheet, remember that this guy is still in testing mode, so improvements to that figure may be coming; this project may also never end up in actual production as well.  Assuming that the WildCat does go to production, and for a little fun, assuming that it hits production lines as is in the video, what kind of military applications could you use this guy in?  Aside from barreling through an insurgent’s garage door to kick off an early morning raid?  Let’s take a look. 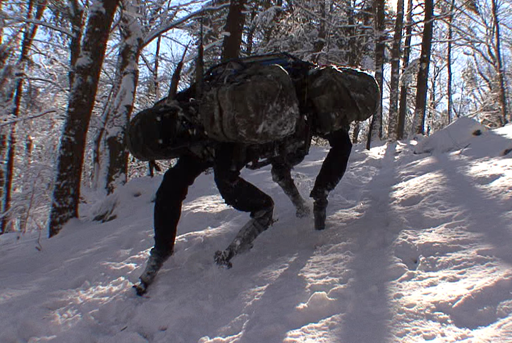 WildCat: How Could it Be Applied?

Like a few of our current, aerial drones up in the skies, the WildCat has a similar drawback or limitation in its current design; can you spot it?  If you’re looking visually, then you’re off the mark – all you have to do is listen.  Do you hear how loud the WildCat is?  That essentially rules this four-legged beast out of any tactical element, because the enemy could hear this thing from miles and the element of surprise would be gone.  Now, you could still employ it as a stellar diversion while you have a sniper team waiting for the enemy’s likely regress route, but that crazy engine noise presents more problems than its worth at this point.  There are however, other options for employment.

Since us Marines love to walk – or “hump” as we call it, with all our crazy gear – the WildCat instantly provides the option as a robotic mule; in other words, you could use this thing to haul a huge portion of your pack during a long movement.  Once again, that noise is going to limit you, but there are some logistical possibilities here for even small units.

A third route you could take with this, and this employment option could be used immediately, is to add the WildCat to any QRF or Quick Reaction Force’s arsenal.  For those that have no idea what I’m getting at, patrols and ground units should always have a “QRF” on standby back at base, so in case the patrol gets into a heavy firefight, they can call back and get immediate assistance.  So how does the WildCat fit in?  That’s easy, and pretty exciting: with the firefight already broken out, being “loud” is no longer a problem.  How psychologically defeating would it be from an enemy’s perspective to see a Marine or Army QRF arrive (well, it probably already is!), but on top of that to see the WildCat unfold and start charging like a steel bull at your machine gun position?  The WildCat is QRF ready, in my opinion, but we still haven’t covered probably one of the biggest questions: can I put a rocket launcher on it?  Okay, how about any weapon?

WildCat: Weapons or Cameras or Both?

From a rational standpoint, I assume that BostonDynamics first goal is to perfect the WildCat’s movement capability before they start putting .50 caliber machine guns on its haunches.  That being said, what can we expect once they finish teaching it to run?  My first assumption is that cameras are a no-brainer, but unless they somehow minimize or suppress that engine noise, I don’t see a whole lot of value there.  Since the WildCat is likely insanely heavy, it would provide a really solid base to mount a medium machine gun; heck, even a pair of light machine guns could be really useful; the solid base would allow for more precise machine gun fires much like you get from an Abrams tank, and with those in play, now you have a really awesome four-legged capability.

On a humorous note, my awesome fiancee just recently bought the latest Metal Gear Solid game for me, Revengeance, and the WildCat has a striking resemblance to one of the first few bosses (and one that keeps kicking my ass at this point), Blade Wolf: 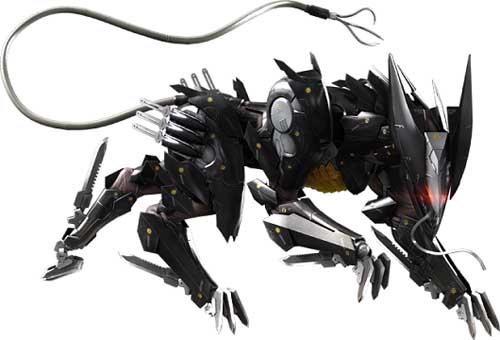