Now I really feel old.  Is the original EverQuest really that old?  Released in 1999, before Y2K scared the shit out of just about everyone, and just before this guy was even a junior in high school, EverQuest, and MMORPG’s for that matter, has really come a long way.  Years later EQ fans were introduced to a bland, but still addicting EverQuest 2, and then of course we all know what happened next: WoW.  And in fact, EQ is not quite done as a series, as Sony Online Entertainment has the third main installment in the works, which is tentatively slotted for a late 2013/early 2014 PC release.  But let’s get back to the point here which is the original EverQuest, in which killing rats became many young teenager’s first real job, and where you prayed to your favorite deity that your Aunt Nancy didn’t call to interrupt your 14.4 modem’s blazingly fast, AOL connection.  Yes, let’s jump back to 1999. 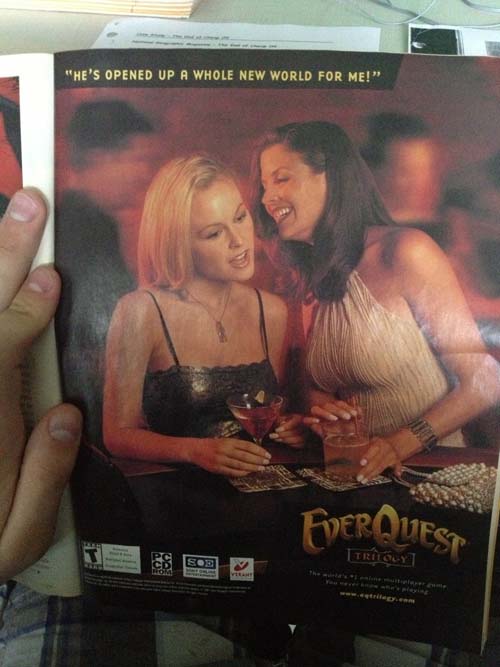 Ahh yes, the beginning of Internet dating, which to be honest, EverQuest helped facilitate.  Now we have amazing, professional, custom-made gamer dating services like LFG Dating which are pulling new users like, well, EQ did back in 1999; we really have come a long way, haven’t we?

I think my favorite memory from EQ1 had to be my first experience running my character through the opposition’s main city (so I forget the names; slay me in the comments), only to trigger a train of epic NPC’s behind me in a matter of seconds.  For 1999, it was a rush.  Now, it’s no big deal.

BTW, we were serious about LFG Dating: it’s amazing, and free to sign up.  When did a shameless plug for a sister site ever hurt anyone?