It’s finally here, and thanks to my shoddy wireless router, I have fallen well behind the pack with the long awaited fourth season of Arrested Development.  Almost simultaneous to the show’s release on Netflix does my wireless router decide to revert back to ancient Internet speeds, making my streaming Netflix basically un-watchable.  You know it’s bad when you can’t even watch a hilarious YouTube video on SQ because it takes 15 minutes to load; thankfully, yesterday, I was able to fix the problem and enjoy the first three episodes of Season 4.  So what are my initial thoughts on the season everyone has been waiting for all these years?  If you haven’t seen the first three episodes yet, and don’t appreciate a good spoiler, then I’d hold off on hitting that tantalizing link below; that was your warning.  The rest of ya’all, click away.

I think that’s everyone’s first question when the show first starts up (provided your wireless router cooperates), and I think it’s a natural one.  Season 4, at least the first three episodes, feel exactly like Arrested Development, which is a great thing.  I think the most crucial element to achieving that lies in the fact that the entire cast is back; sure they look a little bit older (they are), but viewers don’t have to deal with some new, replacement character that wasn’t there before.  Same theme music, same Ron Howard narrating, same awkward George Michael, except this time he’s in college.

So you’re saying it’s hilarious, right?  Not quite.  I think my biggest issue with Arrested Development Season 4 is the season’s opening structure: each episode seems to really only focus on one character at a time, almost to recap where each character has been during the time frame between the third season and today.  I think it’s a great idea, but I don’t think I like it.  In my opinion, Arrested Development is best with the cast as a whole, and when they are together.  The two exceptions to that rule, okay three with Michael Cera, are Tobias Fumke and Buster Bluth; you know what, GOB would have to be included in there as well.  See how good this series is? 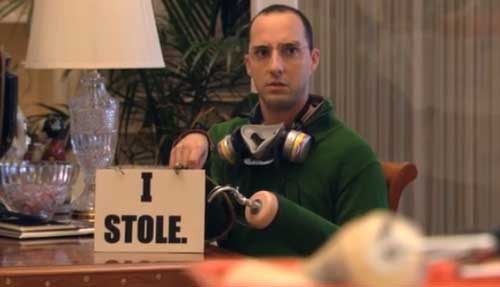 The plus side to all of this is the bigger picture: there are 15 episodes to Season 4, so once the character intros are complete, I think the show will really get good.  I don’t want to paint a Grumpy Cat picture either, as all three of the first episodes have had some really funny moments, but it’s not quite there yet.  The key word is “yet”, folks, as I have full confidence.

Roger Sterling Couldn’t Even Save the Sweat Box Episode

Season 4 has celebrity cameo appearances everywhere, with Mad Men’s Roger Sterling making a lengthy appearance in the George Bluth episode which involves the US/Mexico border, drugs, and a business idea involving $15,000 a glass lemonade and a sweat box.  Arrested Development has always had more of a “mature” sense of humor, and historically a lot of their jokes involve political issues of the time, along with many that are just strange.  Strange jokes are great as long as they hit, but the sweat box thing simply misses.  When an entire episode (which are commercial free and 31 minutes long now!) is based on a missed-joke and essentially one character, it turns into a snooze-fest.  Episodes from past seasons could stay afloat because all of the characters were involved, and viewers would simply forget about the miss and find ourselves laughing again at the next scene.  Again, I’m only three episodes in, and there is still a lot of Bluth family time left. 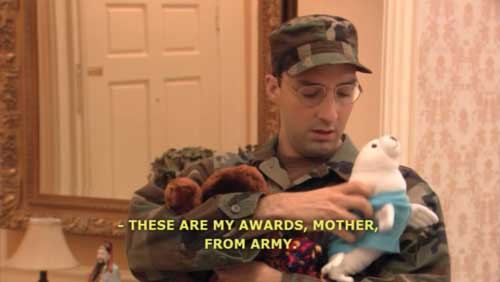 Before all three of you slay me for being so negative, let me reaffirm that I am only 1/5 of the way through Season 4, and that I have given credit where credit is due.  The George Bluth episode may have been terrible, but it hasn’t deterred me one bit.  At this point I would have to give Season 4 a:

Bring more Tobias, Buster, and GOB’s magic tricks, and we’ll be back in business in no time.  12 more episodes to go; I’ll publish my mid-way and final thoughts as I clear through the rest of the season.  In the meantime, leave us your hate mail below in the comments! 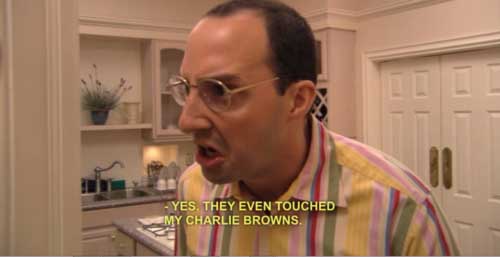