5 Most Frustrating Video Gaming Elements of My Childhood

Before I kick off my childhood gaming horror story, please understand that I only owned certain video game systems – NES, SNES and my N64 which I bought myself – growing up as a kid and teenager.  Oh, and we had a sweet Hewlett Packard computer which at this point is probably museum worthy.  Long story short: I didn’t have Sega Genesis, or the fancy color Game Gear, or even Sega CD – I had to go over to friend’s houses to play those, so my most frustrating moments (key word = my) are naturally going to stem from what I owned.  Are there others?  I’m sure – but that’s what our comments are for!  Alright enough with the back story – it’s time to rage! 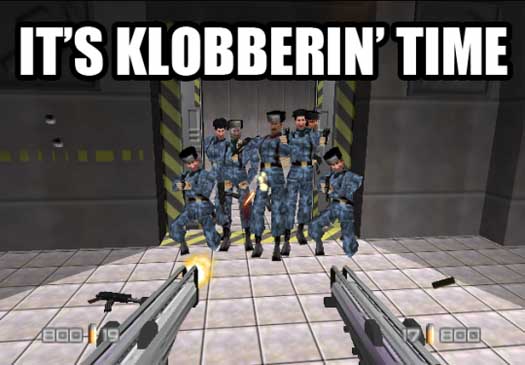 If you’re new to SQ Nation – welcome, btw! – then you are probably not aware that your’s truly is quite possibly the biggest Goldeneye 64 fan either side of the Mississippi (think about it …).  Tebo – my partner in written crime here behind the SQ scenes – can readily attest to many a beer-laden night somewhere in Chicago-land as I tried, over and over again, to speed run through the Control level on 00 Agent just one second faster than my last time.  Heck, I’ve even posted an SQ Aztec Challenge – none have tried, but likely all will fail, haha!  But that doesn’t mean the legendary game was all roses and Skittles: the Klobb ranks as hand’s down the most worthless piece of junk my virtual, spy-agent hands have ever laid their hands on – and it irritates the crap out of me even today just thinking about it.

Speaking of Skittles, that was probably the ammunition the Klobb fired in Goldeneye, because those freaking rounds couldn’t have even pierced my Teenage Mutant Ninja Turtles pillow that I had as a kid – more on those bastard, sally Turtles later on.  The Klobb was pure garbage within an otherwise-perfect video game that pioneered first person shooters forever – hell you could even dual wield two of them and you’d still be better off running in with slappers instead.  Pure, pure garbage.

Every Square Inch of TMNT for NES 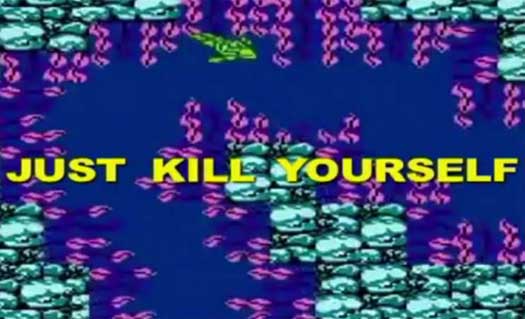 In another lifetime, Tebo and I actually did a hilarious podcast on this god-forsaken NES game, and when you automatically see pictures like the two above pop up in the first row of Google Images, you know you weren’t alone in your frustrations. Teenage Mutant Ninja Turtles for the NES ranks as easily one of the most challenging video games from the 8-bit era, but it was facepalmingly frustrating as well.  Let me use the beautifully done, aforementioned picture above as Exhibit 1:

While you’re navigating your favorite Ninja Turtle through one of the countless, platforming sewer levels in TMNT, only to miss-time your jump and fall into two feet of sewer water, your Ninja Turtle (key word = TURTLE, AS IN MAMMAL THAT CAN SWIM) not only DROWNS, but he looks like a mother-f’ing toddler flailing his arms as he floats off your screen.  Oh, but then when you somehow manage to make it to the electrified lake later on in the game, that same turtle all of a sudden remembers how to swim to the bottom OF AN ELECTRIFIED FREAKING LAKE.  “Just kill yourself” is advice I wish I would have gotten as a kid and just passed on this game.

There are about 25 other painfully frustrating aspects of this game that I could write a novel – or record another hilarious podcast with Tebo on – but I’ll leave that for the sure to be popular comment board for SQ Nation. 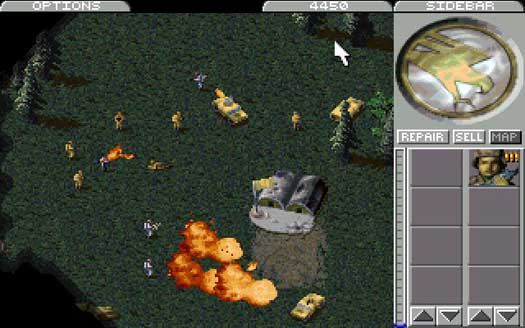 I already gave you a sneak peak about this epic frustration, but growing up the original Command & Conquer was my first online multiplayer experience.  I can’t tell you how many times my cousin and I would spend three to six hours getting our two damn games to simply connect (I blame his AOL; his CD must have been scratched), only to have one of our sisters pick up the damn phone and disconnect our game – just as I was about to put the finishing touches on a backdoor, engineer MCV capture (I learned about Murphy’s Law, and ironically enveloping enemy positions at a young age – something my Marine Corps instructors were impressed about 25 years later!).  It’s always the sister, isn’t it?

Name your game from the 56k – or god forbid, 14.4 – modem days of online gaming: one phone line was always the main ingredient for a recipe of disaster; the fact that your siblings loved to fuck with you probably didn’t help either. 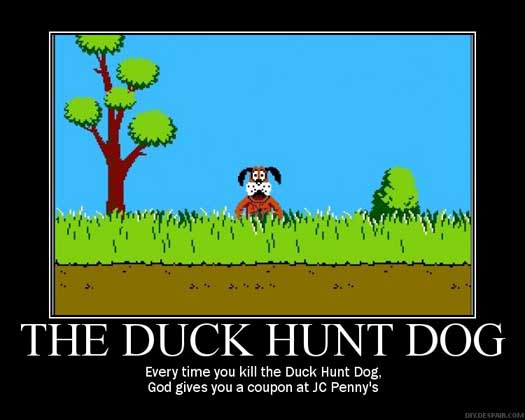 Does this son of a bitch really need any explanation?  I mean come on, if you’ve ever picked up a controlled, you surely have been mocked by this stupid, egotistical dog that does nothing but laugh at your piss-poor marksmanship.  What the f Nintendo?  Were you purposefully trying to turn kids into raging monsters within an hour of opening up their brand new Nintendo Entertainment Systems in the 80s?

That dog pisses me off so much that I’m just going to leave it at that.  Screw him.

And the 5th Most Frustrating Moment From My Childhood Is …

Completely up for debate!  I have got a truckload more that all received worthy votes – like the ridiculous NES Power Pad (awesome when it cooperated), or just about anything Battletoads – but I’m going to leave our fifth slot for SQ Nation and the comments.  I know ya’ll have a good amount of childhood video game rage still brewing inside of you, so let it out and we can get our own group therapy anonymous session going in the comments below.

Once again for those of you new to SQ Nation, welcome!  We update SQ constantly, and have a ridiculously large tag cloud loaded with an insane amount of homemade content.  Stay class SQ, and as always, much more to follow!