Camp Dwyer?  Camp DWYER?  If you just channeled your inner-Jim Mora (of epic Indianapolis Colts coaching press conference meltdown Hall of Fame – see SQ’s front page content slider for the awesome screenshot) as you read Maxim Magazine’s recent (?, there’s no date) military article “The Five Most Dangerous Places in Afghanistan“, then you’re not alone.  Did author Jaeson Parsons actually do any research for this article – like proper journalism calls for – or did he just assume that no one would care?  It’s readily apparent that he’s never been to the country he wrote about, but good grief, Camp Dwyer?  Hit the link below for even more absurdity.

Since the author has likely never stepped foot in Afghanistan, let me shed some light on this claim that Camp Dwyer is one of the most dangerous places in Afghanistan.  The one piece Mr. Parsons did get right is that Dwyer is in the middle of freaking nowhere – it is surrounded by miles and miles of uninhabited, or sparsley inhabited desert.  Do you think the Taliban would be stupid to mount an attack across miles of open terrain?  The only correct answer to that question is NO.  Perhaps the author was confusing the attack on Camp Bastion – the British base in Helmand – as Camp Dwyer, in which a Taliban force did penetrate friendly lines, killing Marines and destroying some of our Harrier jets.  That was my first thought, but then I quickly realized that he probably doesn’t understand what “camp” actually means, which is common in the civilian world.  Camp refers to the largest friendly military base in Afghanistan, with the next smallest being a FOB (or Forward Operating Base), then COPs and PBs (patrol bases); Camp Dwyer has let’s just say a redonkulous amount of armed Marines – the fact that this city-sized camp with 15 chow halls is listed as one of the most dangerous places in Afghanistan is just a joke. 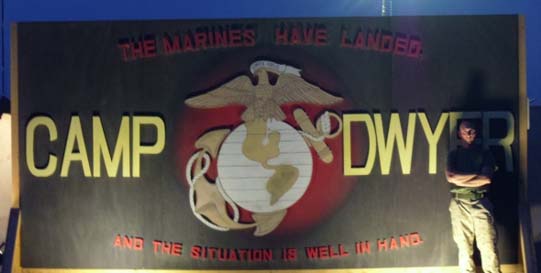 If the author’s credibility didn’t get washed out entirely by the Camp Dwyer inclusion, then this quote effectively finished the job: “At least it was, until NATO showed up and put the kibosh on their drug superhighway—much to the dismay of not just the Taliban, but the hundreds of Afghanis who make their living off the trade. Though progress is being made and improvements to a major transportation route have brought alternative opportunities, the killing continues on an industrial scale.” Again, simple research would have solved this problem as the people of Afghanistan are referred to as “Afghans”, while their money is referred to as “Afghanis”.  That’s like me calling Americans “dollars”, and it’s ignorant comments like that that is probably one of the biggest reasons why everyone hates the United States.

While the rest of the article was fairly spot-on – Sangin has been the most dangerous spot in AFG for the Marine Corps – the two above issues just make the entire article garbage, but then again this is Maxim Magazine we are talking about.

Feel free to chime in on the article’s comment section (Maxim uses Facebook now; FYI Maxim is probably not a safe for work site, so proceed with caution), as well as ours below to make sure your voice is known.  For all our Marine Corps analysis and postage, just head on over to our official Marine Corps site tag – we are constantly adding more!

4 Replies to “Maxim: “Camp Dwyer One of Five Most Dangerous Places in Afghanistan” /Facepalm”