Oh boot camp, how I do not miss thee.  While technically I went to Marine OCS (Officer Candidate School, or in simple terms: boot camp), it’s not something I would really want to do again.  For those guys who tragically got hurt at OCS – fractured bones was the most common from the constant running/hikes – they got the chance to start all over again, which makes them even more impressive. Would you want to do boot camp 1.5 or 2 times?  I would – but I would be one grumpy mother trucker in my second go-through.  Alright enough with the nostalgia: what I have here for you in preview picture form above, and full picture form below, is arguably – no probably the funniest boot camp letter I have ever read.  It is also ironically maybe the most coherent and intelligent, but then again, it’s not really that surprising because it came via the frustrated pen of a paralegal specialist!  What’s a paralegal specialist in the Army, you ask?  He/she is pretty much the tip of the spear on the front lines.  /sarcasm.  Full boot camp letter below!

Alright so before I start dropping spoilers like it’s cool, you just need to read this thing from start to finish on your own – I don’t need ya’ll writing me any nasty letters telling me how awesome I am. 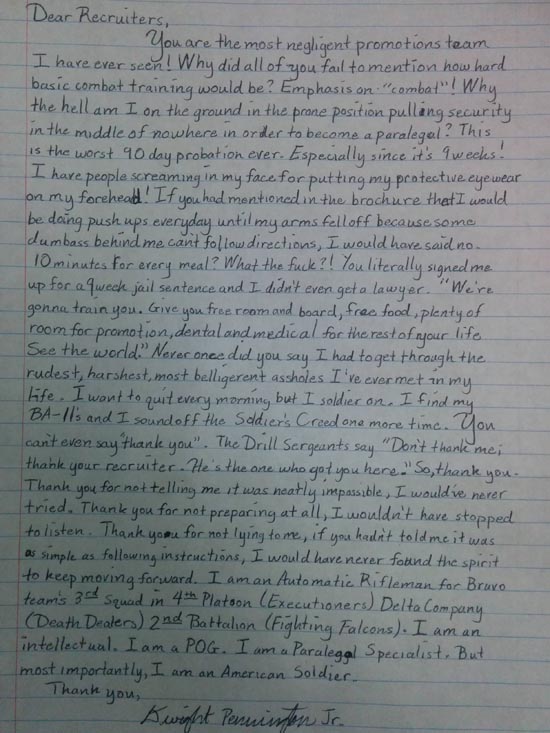 Told you it was awesome!  Although his name is somewhat hard to read – which is weird because he may have the best penmanship in the world for not being a second grade teacher – it appears to be “Dwight Pennington Jr.”  Well Mr. Pennington – if you actually exist and this isn’t just a spoof (in all honesty I don’t even care – it made me really laugh pretty hard) – I think you have a career in comedic writing waiting for you down the road after your military paralegal career comes to a close.  Saturday Night Live, perhaps?  Heck, how about a new funny military movie: outside of Stripes and Tropic Thunder, it is really slim pickings.

If anyone can drum up a funnier boot camp story from their time in boot, or is able to scrounge one up form the dearths of the Interweb, drop us a line about it and a link below in the comments!  More content coming ASAP – stay classy SQ!

One Reply to “Probably the Funniest Boot Camp Letter Ever”