If you haven’t seen the excellent Afghanistan war (Operation Enduring Freedom) documentary Restrepo yet, then you absolutely need to as soon as humanly possible.  Korengal, which comes straight from Restrepo’s award winning director Sebastian Junger’s camera, basically continues on where Restrepo left off, as he states its “the same men, the same valley, the same commanders, but a very different look at the experience of war.” (http://goo.gl/w4RXtG) With 44 days left until the Kickstarter ends, Mr. Junger still needs about $55,000 to reach his goal of $75,000, which he is utilizing to bring Restrepo – and the intimate war stories of not only this incredible US Army infantry platoon, but of every force that has fought in the Korengal and Afghanistan for that matter – to the big screen around the entire country.  I am pumped for this film, as Restrepo ranks as #2 on my favorite OEF documentaries to date; find out what my number one – as well as more slightly qualified thoughts on Korengal, the movie and the valley – after the jump.

While Hell and Back Again stands as my favorite OEF/Afghan War film – I was in Helmand Province, so seeing that same terrain, which was just a few neighborhoods to the north of where I was at for seven months really registered with me – Restrepo is a very close second place.  No, I still haven’t seen Lone Survivor yet, but that’s only because I want to read the actual book before I see the film.  Heck, I may not even see the film after I read the book, just because the book is always better than the movie.  But enough about that, let me jump back to the Korengal. 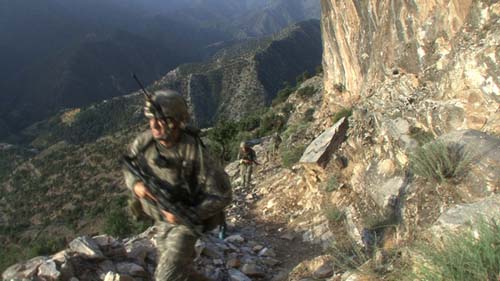 While I personally have never set foot anywhere in Afghanistan outside of Central Helmand Province, 3d Marine Regiment – which I was proudly a part of while I served my four years in the Corps – has a storied history with the Korengal Valley, as our regiment deployed and fought there just a few years before I arrived.  Many of my own Marines in my platoon – a sergeant and my staff sergeant – both deployed and fought in the Korengal, and I can only imagine what fighting up in the mountains was like (see the insane picture above).  If you’ve ever worked out in high altitudes, or even worn some of those crazy high altitude training masks while you ran on the treadmill, then you have at least an idea of what a severe lack of oxygen can do to you physically and mentally.  With that picture in mind, now throw in about 75-100 pounds of gear – depending on if you’re hauling a light or medium machine gun, a bolt action M40A3 sniper rifle, or even just an assault backpack with 3 days worth of water – and imagine what it would be like.  On top of that – and this was the norm in the Korengal – throw in the fact that you’re going to get shot at just about every time you step out into the legendary valley: are you out of breath yet?  Soldiers, Marines, Sailors and our special forces (AF as well) who fought there in my opinion deserve an even higher level of respect.  I won’t even get into what it was like in the winter months, but you can always watch Restrepo – or Korengal in the near future! – for that.

This Marine is absolutely stoked for the release of Korengal – now I want to watch Restrepo and Hell and Back Again again.  If you haven’t seen either, then you know what I’m about to tell you – watch them now, this weekend, as soon as you can.  And when you’re done with those, share the Korengal’s Kickstarter link with your buddies so Sebastian Junger can hit his goal – then we can all watch Korengal in theaters!

More on Korengal as it happens – can’t wait for this one!