Alright, everyone check your pants.  Okay, now check them again.  In a combat zone, direct air support – whether it comes from a Huey or an AC-130 Gunship – is almost always a motivational, morale-boosting, and Taliban-smoking experience.  I say almost always because sometimes mistakes are made in either the chain of communication when placing the order for a Super Sized, 500 pound bomb, or in the actual delivery by the pilot in the sky.  In this instance that was one of those moments in which a mistake was made, but thankfully no friendlies were hurt.  Don’t pass on this video – as always more salty commentary after the link!

500 Pound Bomb Drops on US Soldiers by Mistake Video

While it’s hard to really experience the sound – and more importantly the concussion – from a blast like that (“danger close” is an understatement here), what really makes this video is the fact that the soldiers actually show the audience back home just how crazy close the impact from that 500 pounder really was … on the edge of their freaking position!  In my opinion, the mistake is pretty clear: someone, whether it was the JTAC (joint terminal air controller – I’m a Marine, so this may not be the right acronym on the Army side) or someone else in communication/approval chain, pretty much screwed up two very important grid locations: the reported enemy position with the friendly position.  Jesus, if you double check anything – double check that, please.  That is coming from someone who’s been on the ground in Afghanistan, but thankfully not that close to a 500 pounder; IED’s in Helmand however are another story.

But wait – they mentioned piss tubes – so while the name is obvious, I want to make sure my civilian readers in SQ Nation understand what these field expedient bathroom amenities look like! 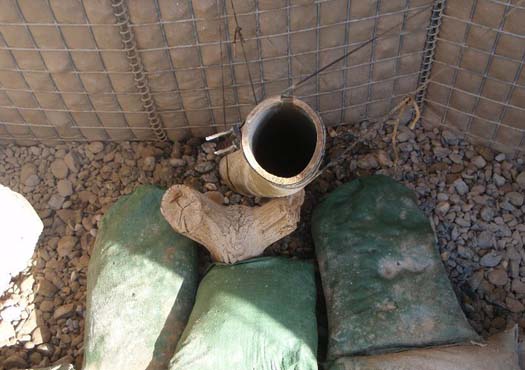 I can’t tell you how many comments/questions I got from that photo above asking me “what the hell are those”?  Well, now you know America.  Pretty fancy bathroom, don’t you think?  I thought so!

More danger close videos to follow!  In the meantime, if you’re looking for more military footage look no further than some of our more popular military content tags: Afghanistan Combat Videos, Combat Footage, and Marine Corps.

2 Replies to “Danger Close Video: 500 Pound Bomb Drops on US Soldiers by Mistake”