What would you buy with $65 million?  Although Mr. Kotick has yet to see that entire figure deposit into his bank account, that ginormous payout has already been etched into Activision Blizzard’s financial books for 2012, and he’s likely already got a few new purchases in mind with that cash (most of is technically stock options, but still).  Although many people despise the Chief Executive Officer position for receiving these kinds of payouts, many do not understand the burden of command that these men and women hold.  Tim Cook, the head man at Apple, has been rumored to be on the chopping block on just about every media news outlet since the technology leader’s stock has dropped over the last few weeks.  What people fail to pull into the conversation is that the stock price is still higher now than when he took over; many analysts have also stated that the stock was way overvalued to begin with, and that cannot be Cook’s fault.  Kotick has navigated Activision for over twenty years, and he’s getting compensated for leading a video game development company that has gone from obscurity, to the top of the charts; I would argue he deserves it.  Hit the link below for more details behind Kotick’s big payday. 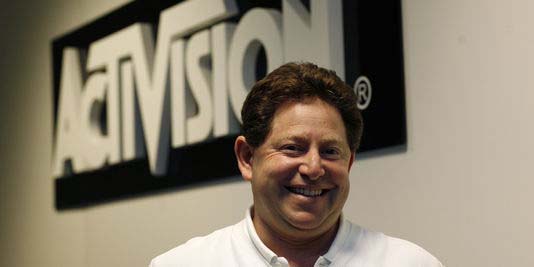 How does a base pay of $2,000,000 sound?  If the figure doesn’t quite wow you, try dividing that by 26 to get your two week paycheck figure (um, that’s about $77,000 every two weeks).  Yeah, now it probably stands out.  CEO’s also stand to receive annual bonuses, although those are usually substantially tied to the company’s success; no profits usually equals tiny, or zero bonuses.  Activision has done more than alright however, which meant Mr. Kotick nabbed a $2.5M bonus for 2012.  So where does the rest of the paycheck come from?  Stock options; $55,900,000 worth to be exact.  Pretty awesome payday.

If you haven’t checked out Bloomberg Businessweek, it is a really neat resource for researching all of your favorite gaming companies … and their leadership.  Check out the full background on Mr. Kotick right here, and next time your buddies are complaining about how they could be CEO, or how they’re overpaid, just point them towards some of these public leadership biographies.  That might put it into perspective for them; I know it did for me.

Leave your thoughts and comments below; more business gaming news commentary to follow, as always.