The early 2000s was a great time for comedy films. Maybe this was because I was in college at the time and it was our joie de vie during pre-parties. Or maybe just because they are that damn funny. I think both are correct.

Every now and then it’s fun to look back on the films that defined who we were at a certain place and time. While these weren’t summer blockbusters or big budget films, they definitely made us laugh all the time.

What do these five comedies have in common? We can’t stop quoting from them in our thirties and they released over a decade ago. The soundtracks were great. The characters had traits that were unbelievably real. And maybe most importantly, there grew in our souls a want to be them. Except for Luke from Out Cold, “He was up in it! Lovin’ it strong!” 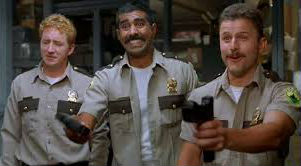 When entering any information into a computer, I don’t hesitate to obnoxiously look up at the person waiting for me and slyly saying, “Enhance….Enhance…Enhance…” While people who have seen this film get mad and then start laughing because they get the joke, others find it less funny. Which makes me want to do it even more.

Not to mention that I can’t hear the word ‘shenanigans’ without cracking a smile. And I’m still surprised that people use this word. I want to reward their hilarity with a ‘nice one!’, but then I begin to think they didn’t do it on purpose.

Van ushered in a whole new time period in my life. I could still be sarcastic and witty, but I could be the good guy at the same time. Plus, I needed a role model who pulled off the t-shirt over the long sleeves.

This may have also been Tara Reid’s finest performance pre-Sharknado. The scene where Van pulls up to her in the street driving his golf cart was a college dream I readily subscribed to. Taj came out of nowhere and almost stole the entire movie with just his interview scene. I can still replay that scene in my head to this day.

“Worrying is like a rocking chair. It gives you something to do, but it doesn’t get you anwhere.”

“Are you stalking me? Because that would be super.”

“Judge’s ruling? Uh huh, yeah. I do believe that was a joke.”

Quite possibly the hardest I’ve ever laughed in any movie at any point, Out Cold new exactly how to mess with the actors. The spinning car in the middle of the road prank made me projectile-spit my beverage over the coffee table. To this day I can watch and laugh, rinse, repeat, and still find it funny.

Not to mention that David Koechner plays a fun role pre-Anchorman. Victoria Silvstedt also makes a cameo. This may be the pinnacle of Jason London’s work – and while the film wasn’t intended to be Oscar worthy, I can’t imagine another person pulling this film off like he does.

“This suit is really cramping my Hardy Boys. It’s no mystery.”

“No regrets. That’s my motto. Well that and everybody Wang Chung tonight.”

I missed this in the theaters but bought it used before my last semester of college. I was minutes from popping it in the PS2 before my roommate pleaded with me to not watch it for a first time until I got to college. Not being too thrilled, I obliged.

And when it happened…it was glorious. Chad, my roommate, had a little brother in for the day. And unfortunately for him, his name is Scotty. And when the song came on, I just looked at him and couldn’t laugh fast enough. That’s why Chad wanted me to wait: he wanted to see my face at that exact moment in time. It was worth it.

“You two really are the worst twins ever.”

“Well knowing what we know now that’s the exact opposite of what we want.”

“This isn’t where I parked my car…”

This maybe the most underrated of the series. The original will always hold a special place in my heart because it came out when I was a senior in high school, so I feel like in a sick, twisted yet humorous kind of way I grew up with American Pie.

Stiffler became so popular he landed in about seventeen other movies – he just had a different name in each. And even years later he was still making an appearance in Old School. The superglue scene where Jim is in the ambulance and Stiffler gives him the thumbs up provided me with my favorite body language mock for the most absurd of times.

“I didn’t get your daughter’s name, but hopefully my son did.”

“I can taste the bubbles.”

“I am a band geek. I just never joined the band.”

“Yeah, you must know Michelle.”

We could probably have made this list a Top 10 easy, but we can always throw more in the comments! And you can too!