Not counting the Final Fantasy 8 and 16-bit ports, great role playing games on the iOS platform (iPhone and iPad) are extremely rare – and by rare I mean they just do not exist.  But then I came across Battleheart Legacy, a highly rated iOS RPG sequel from Mika Mobile that turned the downtime on my recent vacation into an amazing mobile gaming experience … until I got to the end of the game.  While BH Legacy is a blast to play, and a pleasant surprise when compared against the rest of the iOS RPG library, there are just too many fatal flaws that sadly makes me never want to pick up this game again.

I was skeptical at first, but BH Legacy quickly won me over – the game has virtually zero learning curve, and before I knew it I was already addicted to getting “just one more level” before I logged out.  With easy tap to move and tap to attack game play, along with the proven real-time, WoW-based battle system, Battleheart Legacy at its core has all the ingredients for being that iOS RPG king that the platform so desperately needs. 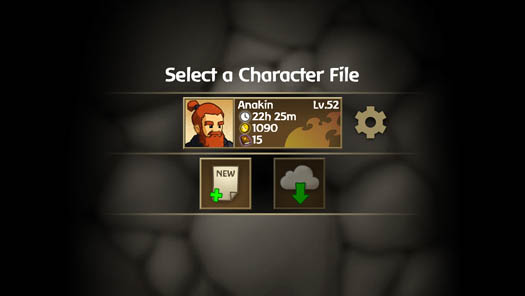 Twenty-two and a half hours – that’s how long this iPhone game – a freaking iOS role playing game – sucked me into it’s addictive world while I was on vacation across the pond.  That’s nearly a full day of gaming packed into a game that only cost me $4.99 – even with it’s major flaws that soured the experience at the end, that’s still a pretty amazing feat.  Sure, there are plenty other iPhone games that I’ve played for much, much longer, but from an RPG perspective BH Legacy is king.  If only Bioware released Baldur’s Gate III on iOS … I can dream, right?

So let’s talk flaws, because after all there are literally a zillion positive reviews on this game just about every where you turn on the Internet.  And once again, I need to stress that the core framework of this game is legit: if these issues that I’m about to address below are fixed in either an update, and/or the third game in what would then equate to a trilogy then I would pay another $5 or even $10 to play it.  Seriously.  But until then, here’s what irked me: 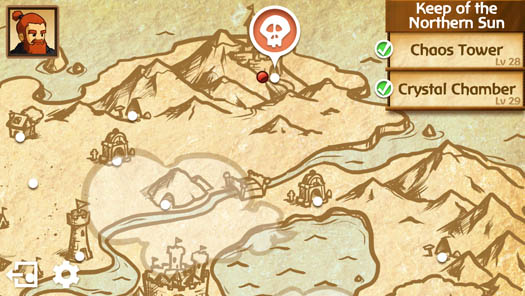 You see the map above?  From the moment you leave the initial village in BH Legacy, the entire world map is available to your hiking boots.  Like in any RPG – and in most cases real life for that matter – the further one walks away from their home point, the more dangerous the world becomes.  BH Legacy takes this implicit RPG characteristic and simplifies it by including recommended level benchmarks for each of the locations, which we’ll just call “dungeons”.  That way before you stumble into an area not knowing what to expect, you know exactly what to expect since you know what level you need to be to conquer it.  Pretty simple, right?  Right … if they weren’t lying to you.

For exhibit A, please refer to the map above, most notably the “Crystal Chamber”, which clearly states one must be Level 29 before they take this dungeon on.  This dungeon is actually one of three mini-boss locations that must be completed prior to the final boss fight, so as an early player working your towards Level 29, you would probably think you could be Level 32 or so and absolutely destroy that boss, right?  Right, I mean that’s what common sense would say, but common sense doesn’t quite apply to certain, key areas of BH Legacy.  You may recall earlier on in this iOS game review that my ginger warrior character got as high as Level 52: you know what level I had to be to beat the boss in the freaking “Level 29 Crystal Chamber”?  While I have had to take some time off because I was so pissed at this game, I had to reach the upper 30’s just to beat that stage; so much for Level 29, huh?  And that’s why the “endgame” in BH Legacy is so much fun: the final boss has no level designation – naturally, right – so I grinded out some more and strolled in at Level 45, only to get demolished. Then I grinded some more up to Level 52 – freaking FIFTY-TWO – only to get steamrolled yet again.  It was at that point in which I nearly chucked my iPhone off the cruise ship, but I was able to calm myself down just in time.  I don’t mind a challenging game – in fact, Demon’s Souls and the Dark Souls games are some of my favorite addictions – but this game got stupid real quick, and the at the worst time in the endgame.  You know why? Because at that point you pretty much realize that you just wasted nearly 24 hours of your life, even if the first 18 were actually a lot of fun.

Are you ready for fatal flaw numero dos?  Of course you are! 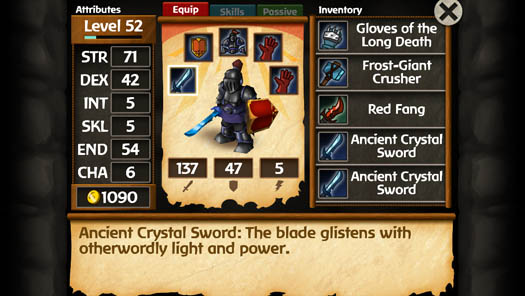 Let’s talk skills and equipment, or more specifically the complete lack thereof.  If Battleheart Legacy actually was supposed to be completed at the level ranges specified in the map, then there would be no problem with the available equipment sets, skills and items available since they scale appropriately.  But once you clear the early 30’s, the new equipment literally stops, and that sucks.  You know how boring and dull the game becomes once you reach high levels in an RPG with no reward but extra HP to show for your hard work?  Extremely boring!  If you’re going to make the endgame so that you have to be Level 60 to finish, then make the equipment and skill sets scale to those levels and beyond.  This was the deal breaker for me, plain and simple.  Yes, at it’s core this game is great, but the endgame – once all of this was revealed – was just too much for me to handle.

We’d love to hear your thoughts on BH Legacy if you’ve played it – I am probably in the minority here with this review, but I’m always up for a discussion.  In the meantime, for those of you who are new to SQ Nation, be sure to check out our other iPhone game reviews, as I promise they are much more positive.  Thanks for stopping by SQ, and have a stellar Tuesday!