After only one year since its release, Crytek’s free-to-play (F2P) FPS is nearing WoW subscriber territory in Russia with more than 9 million players registered.  With the game’s one-year anniversary now in the past, Crytek decided to celebrate by releasing some more interesting statistics about not only the freemium game’s success, but the demographics of its user base as well.  Did you know more than 1 million players registered for Warface in the first month alone?  That is some significant growth; seeing that figure rise almost ten-fold at the 12 month mark is even more eye-popping.  Hit the link below Comrade for Crytek’s statistical infographic, and more good celebratory details on the Russian Warface experience; be sure to bring your own vodka.

Who doesn’t love a good infographic?  My hand is up in the air because it means less typing for me! 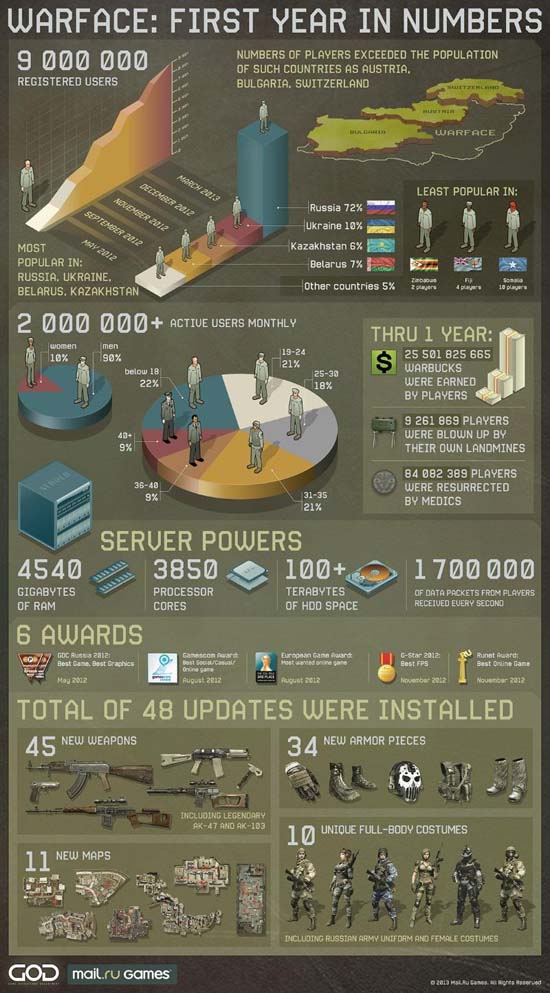 Who’s had a chance to beta test the US version of Warface?  Anyone?  Bueller?  If you have, fill us in on the game in the comments below, because you’re the only ones that are slightly qualified.

For the official story, head on over to Crytek’s website – [Warface Enjoys a Successful First Year in Russia]