Expect to See This Screen Often 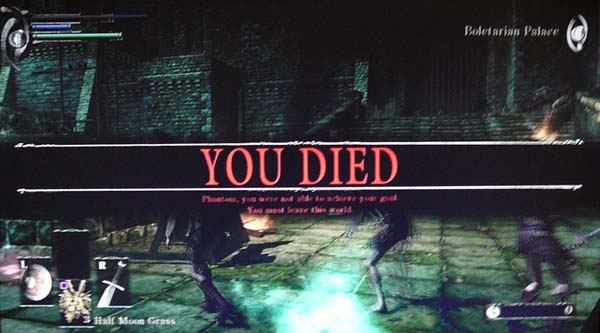 Remember as a kid when you were told not to touch something?  Whether it was cookies that had just come out of the oven, or that friendly looking grizzly bear at the city zoo, your parents knew better, because as soon as they looked away, your getting dragged off into the bear pit and Ron Burgundy is nowhere in sight to save you.  Or you were stuffing your face with cookies.  Pick whatever example relates to you more.  The developers behind Demon’s Souls recreated this basic human temptation beautifully by tactically placing outrageously difficult foes in the middle of a somewhat-safe area; maybe he’s off to the side a little, or off the beaten path, but they purposefully made him noticeable.  The subtly is always awesome too: the monster at first glance looks like the others you’ve destroyed as you poured that tenth Mountain Dew down your throat, but after a few steps forward you slam on the brakes because your Spidey Senses are going ape-shit (Mountain Dew is also likely now traveling down the wrong pipe).  Sometimes it’s the red eyes that give it away, sometimes it’s the fact that you have to be danger close to actually trigger them to attack; every time however you get the delayed feeling in your stomach that something about that dude is badass, or he’s on an entirely different level (pun intended), and if you take one more step forward, you are going to get slayed.  So what do you do?  Common sense would say you have way too many souls to gamble, and you really don’t want to have to start all the way from the beginning again in soul form.  But common sense is not a common virtue with Demon’s Souls players, myself included, so we say, “screw it”, and run at the big dude with red eyes like Leeroy Jenkins only to see this same, depressing screen once again: 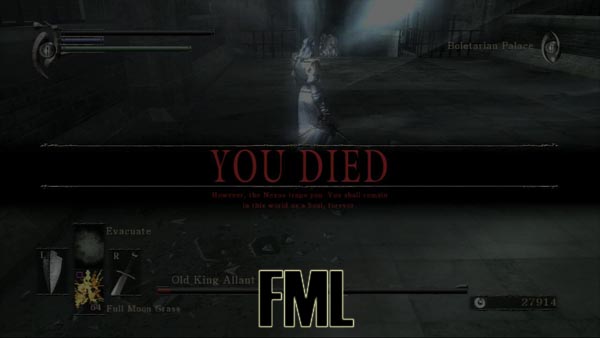